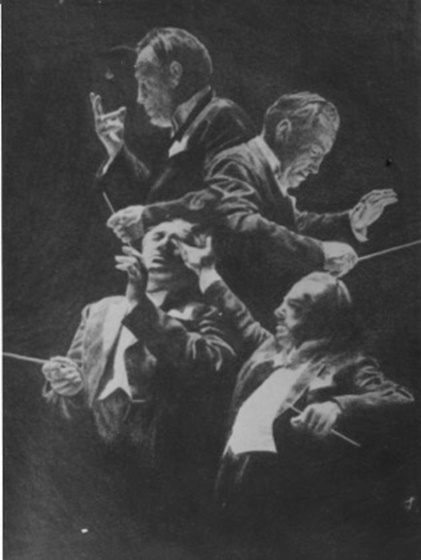 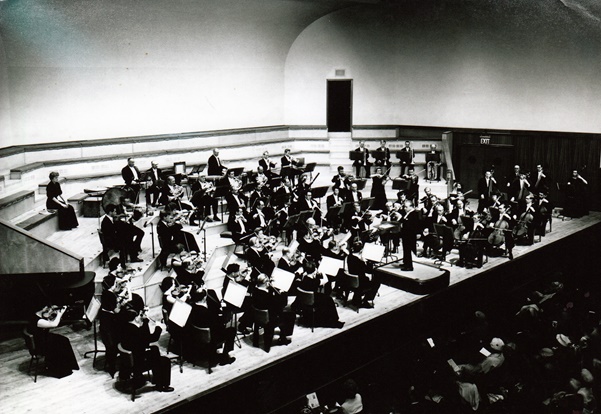 Silvestri and the Bournemouth Symphony Orchestra

CONSTANTIN SILVESTRI was born in Bucharest, Romania.  As a young pianist he built a reputation for his brilliant public improvisations in the styles of famous composers.  At 19 he is on record as stating: “My ultimate aim is the baton”, and at 27 he was conducting the Bucharest Philharmonic in his own work, Prelude and Fugue (Toccata). After becoming the Philharmonic’s principal conductor in 1945 his reputation in Eastern Europe soared. In the Soviet Union, Shostakovich after hearing his First Symphony conducted by Silvestri in Moscow, went backstage and told him: “I re-lived the creation of my symphony during this performance.  If I were to conduct it myself I would probably do it the same way.”  In 1953, Silvestri became artistic director of the Romanian National Opera and of the National Radio Symphony Orchestra.

Silvestri’s ‘discovery’ by a Scottish music critic on a visit to Bucharest led to his UK debut in 1957 with the London Philharmonic Orchestra and to many concerts and recording engagements.  In 1958 Silvestri left his homeland and for three years lived in Paris.  Here he won the Charles Cross Academy first prize for his recording of Dvorak’s Symphony “From the New World” and the Grand Prix du Disque for Enescu’s Wind Dixtuor.

In 1961 Silvestri was appointed principal conductor of the Bournemouth Symphony Orchestra to which he became passionately attached.  He made this English seaside town his home and elevated the orchestra to international standard.  He conducted and recorded with the world’s finest orchestras including the Berlin, Vienna, London and BBC Philharmonics, the Philharmonia and Hallé, the Chicago and Philadelphia Symphony Orchestras, the Moscow and Leningrad Philharmonics, the Orchestre National de Paris, Concertgebouw, Suisse Romande and Tokyo NHKSO, the Prague and Budapest Philharmonics as well as the principal orchestras of Australia, South Africa, Argentina, Scandinavia, Italy and other European countries.  The long list of celebrated musicians who played with him as soloists includes Yehudi Menuhin, David Oistrach, Paul Tortelier, Pierre Fournier, Mstislav Rostropovich, Claudio Arrau, Nathan Milstein, Clara Haskil, Daniel Barenboim and Vladimir Ashkenazy.

His last concert was in Exeter before he died from cancer in a London hospital aged only 55.  In the words of the epitaph on his memorial stone in the churchyard of St. Peter’s, Bournemouth, Silvestri was “an outstanding musician and a remarkable man.”

In his memory, pianist Anda Anastasescu and journalist John Gritten produced many international projects, the Silvestri Scholarships, the CD set A Bournemouth love affair and the comprehensive biography A Musician Before His Time. 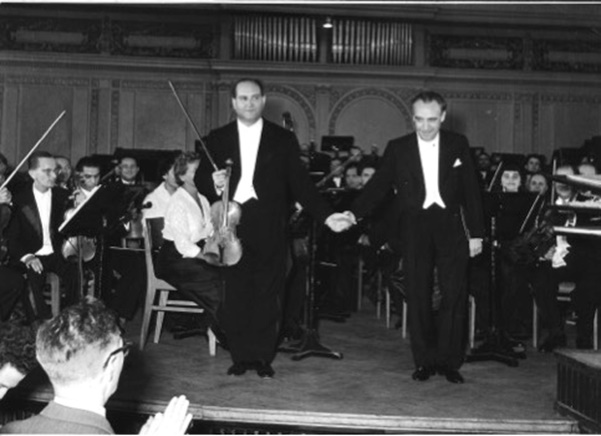 Silvestri with David Oistrakh and the Bucharest Philharmonic Orchestra