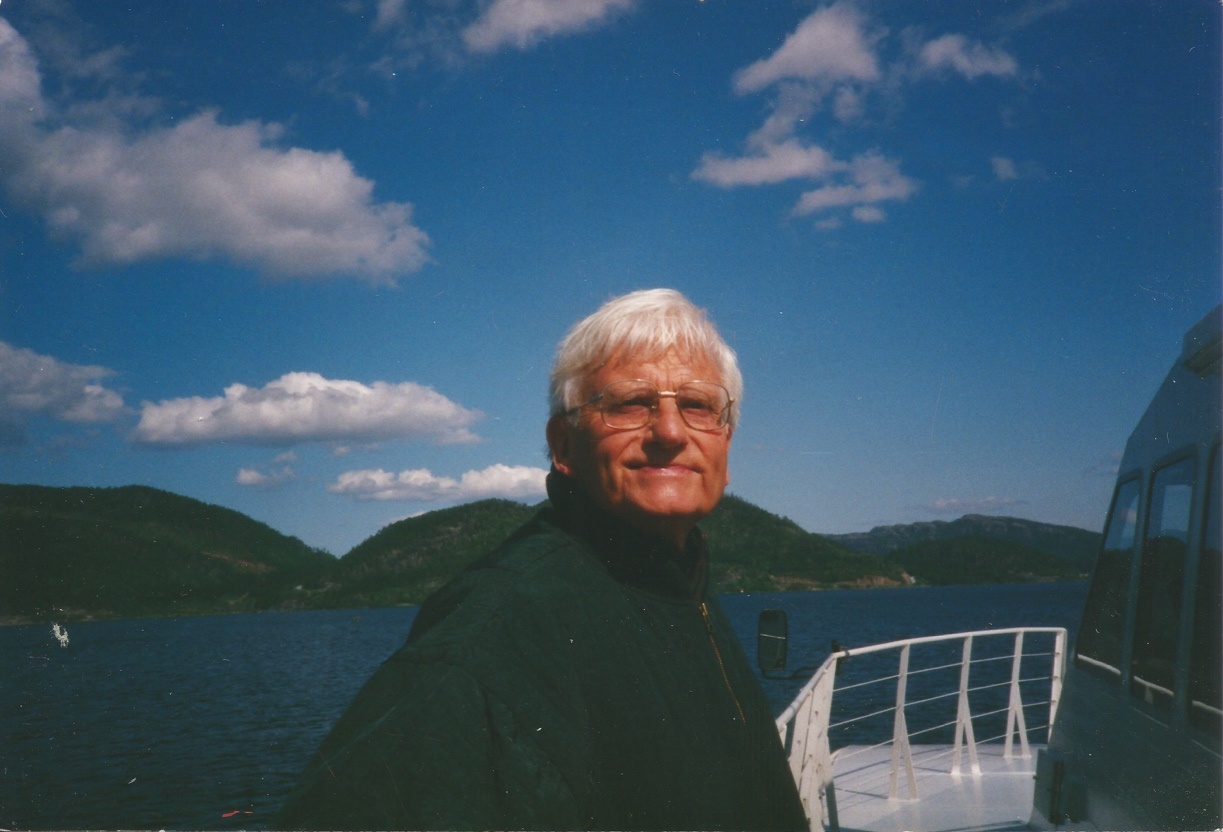 On the Namsen Fjord, Namsos, Norway 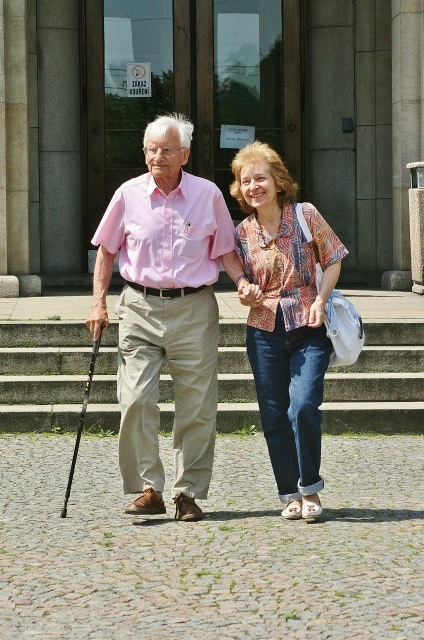 John and Anda – reviving the memory of Constantin Silvestri in Prague 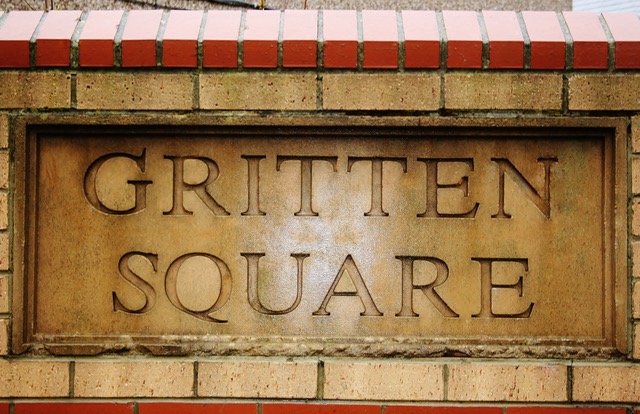 The Gritten Square in Hartlepool in memory of John’s father 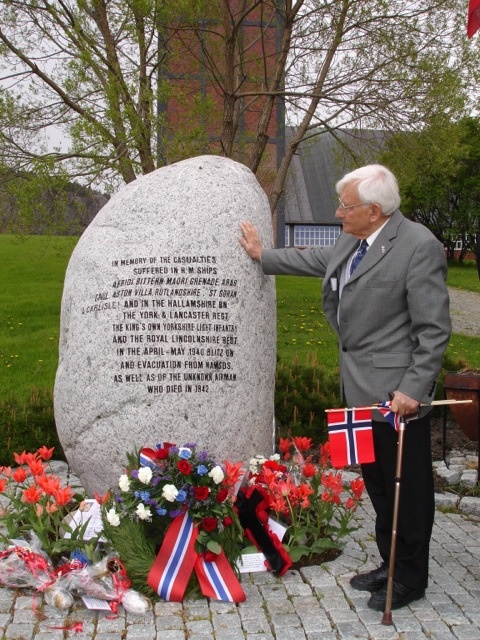 With the British War Memorial in Namsos, Norway 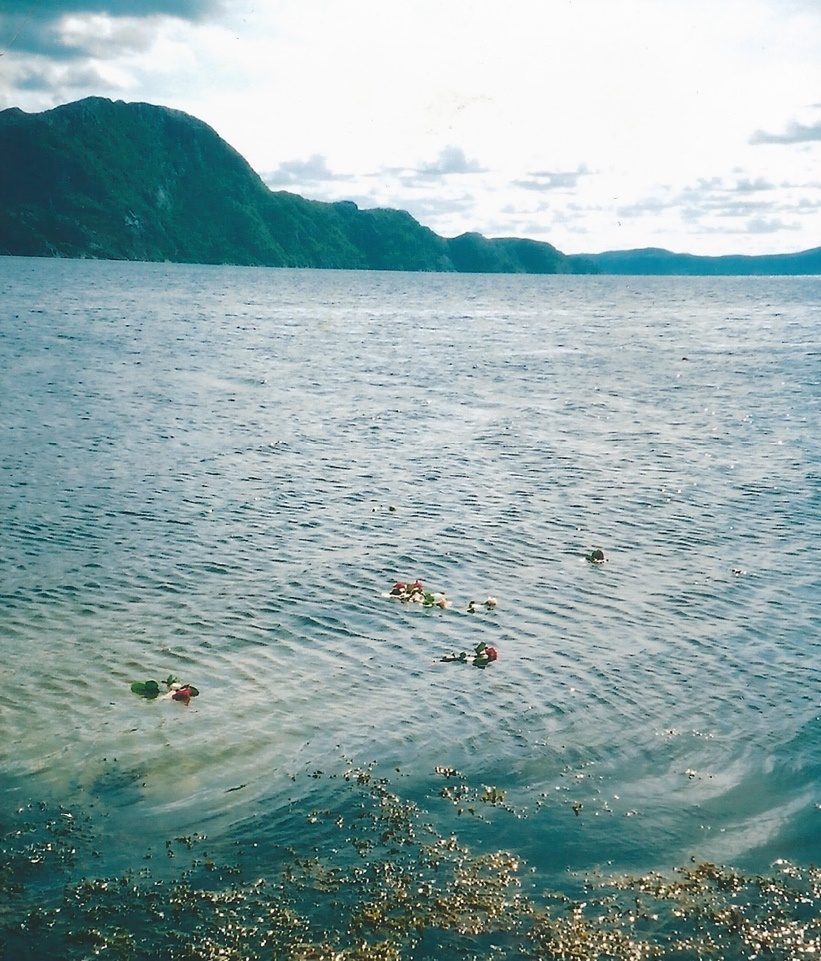 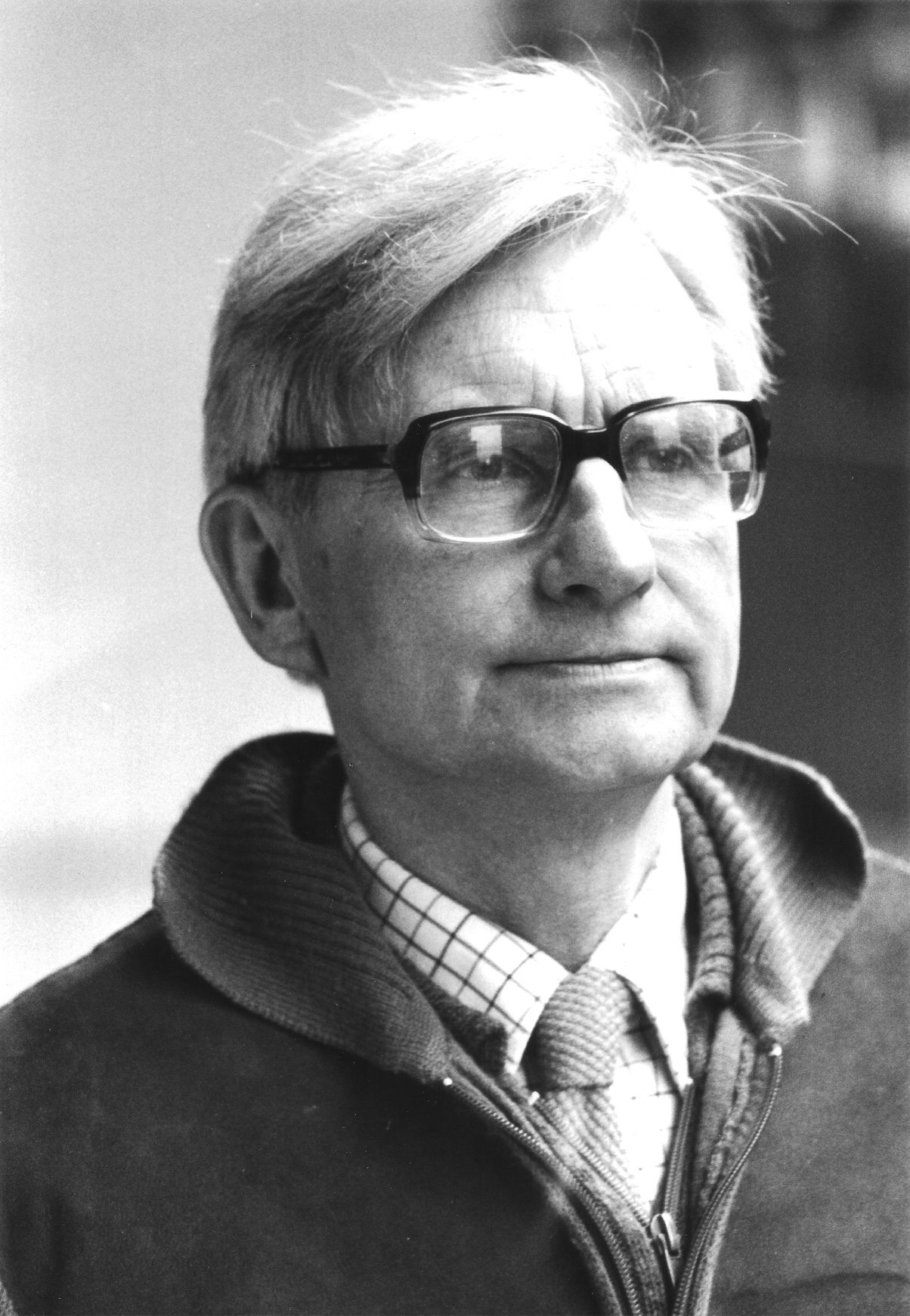 He was the only son of Howard Gritten MP. In his writings, he recalls political events he witnessed at a very tender age: My first impression is of being on a platform at an indoor West Hartlepool meeting, aged three and nine months, sitting on my mother’s lap.  My father was defending his seat in the Hartlepools, which he had now held for four years.  My second impression: I am looking out of a window from inside a car being driven through a residential area.  I am counting the red-printed VOTE FOR GRITTEN THIS TIME cards in windows.  But I can only count up to nine, then have to start all over again: ‘One, two, three…’.

Howard Gritten was the first MP to make a proper practice of the constituency surgery. Sitting in the corner of the Hartlepool Conservative Association office, young John got a glimpse of what life was like for those trapped in the endless unemployment, poverty and grim housing conditions of a shipbuilding town during the Great Depression. It left a profound and long lasting impression on him.

During the Second World War he served for over six years in the Royal Navy and fulfilled his appointment as an Official Naval Reporter (Lieutenant RNVR) for the Admiralty Press Division, 1943-1946.

He shared Hull’s ordeal by blitz; had his baptism of fire during the 1940 Norwegian Campaign – the first ‘Dunkirk’ – when two bombs hit his Tribal-class destroyer Afridi off Norway; was the only Official Royal Navy Reporter to beach in Normandy on D-Day (June 6 1944) and became the British East Indies Fleet’s ONR covering landings in Burma and sweeps in the Indian Ocean under Admiral Mountbatten’s command; filled stories about Hitler’s secret weapons’ attacks on Allied Normandy shipping; interviewed a gun-toting German woman, prompting questions in Parliament; experienced near-obliteration by ‘friendly’ rockets at the Walcheren assault; recorded the epic of HM Submarine Shakespeare, the sea rescue of young women abducted as ‘comforts for the troops’ and the phenomenon of Japanese sailors who preferred drowning to rescue.

60 years after the Norwegian Campaign, together with local Norwegian historian Jens-Anton Andersen, John Gritten initiated the placing of a British war memorial in Namsos, Central Norway and started the Namsos War Memorial Project for which he became a researcher, regular correspondent, fund-raiser and organiser of the visiting veteran parties. The memorial was unveiled by the UK Ambassador on May 17th 2000 – Norwegian Constitution Day.

After the war, John Gritten resumed his career as a journalist: in public relations for Professor Joliot Curie’s World Council of Peace in Prague and Vienna; on British national dailies; and as production and later managing editor of three London-based African news magazines: New African, Africa Now, Africa Today. He has also been a correspondent for various foreign newspapers and magazines, including French, Swedish, Romanian and Bulgarian.

In 1990 he became a trustee and honorary secretary of the London Schubert Players Trust. The same year, together with his wife, Anda Anastasescu, John Gritten embarked on a sustained international campaign to revive the memory of their musical hero, the legendary Romanian-born British principal conductor of the Bournemouth Symphony Orchestra 1961 – 1969. He became Silvestri’s biographer and was interviewed by David Mellor on Vintage Years BBC Radio 3 and by British and Romanian newspapers and magazines. He was invited by the Romanian National Broadcasting House to write the booklet for a CD set celebrating Silvestri’s Centenary; curated a comprehensive memorial exhibition which was shown at festivals and concert halls in Britain and overseas; and contributed to several Silvestri symposiums and academic publications.

He lived with his wife Anda Anastasescu in London on top of a Second World War unexploded bomb!

In 2017, St Paul’s School,where John had been a student, established The John Gritten Prize For International Relations in his memory; and a memorial plaque was placed in the Namdal Museum in Namsos, Norway.

Full Circle. Log of the Navy’s No. 1 Conscript – a war memoir.

A Musician Before His Time – Constantin Silvestri conductor, composer and pianist – an authoritative biography.

Howard and Son, rebels of a kind – a biography of his father, Howard Gritten MP. 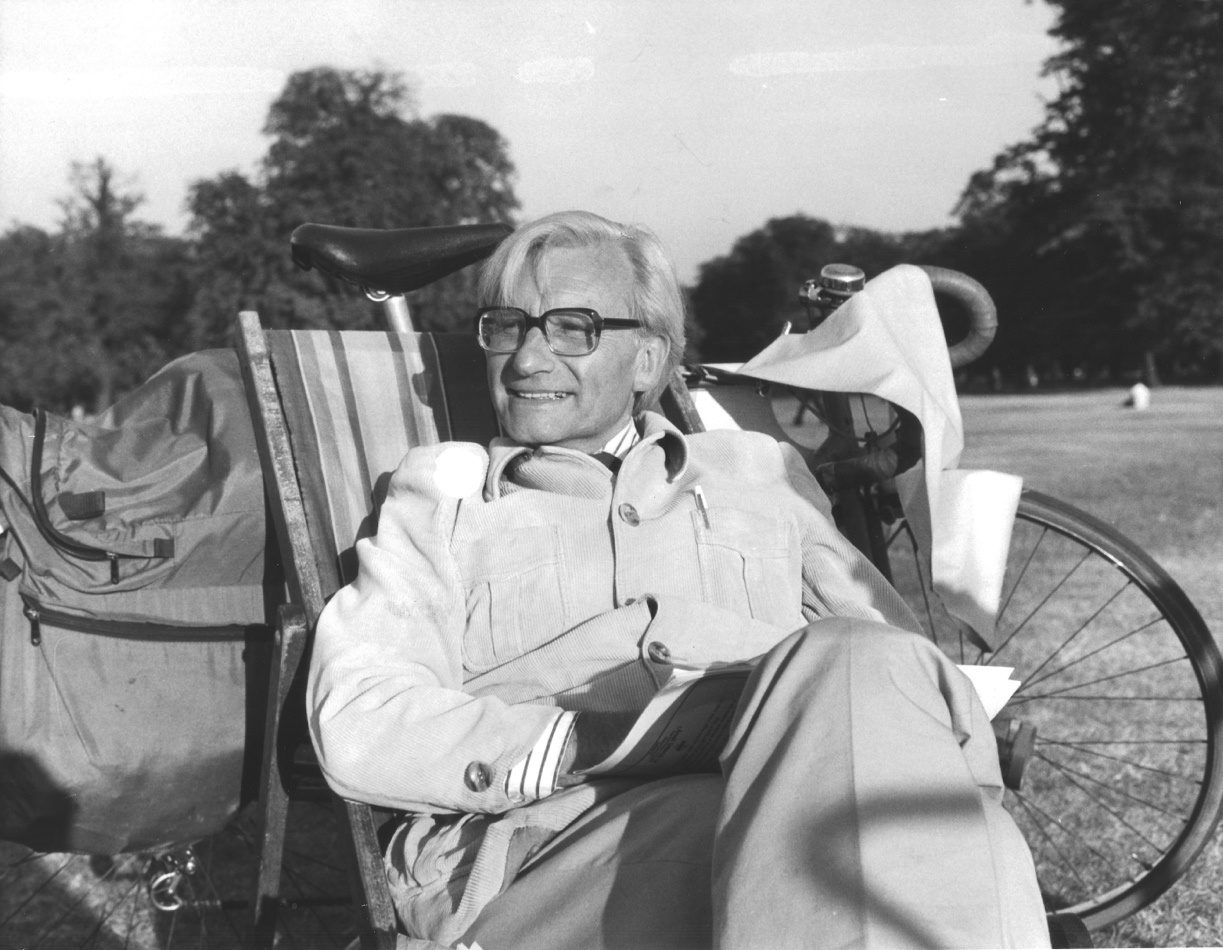 After office hours – continuing to work in Kensington Gardens 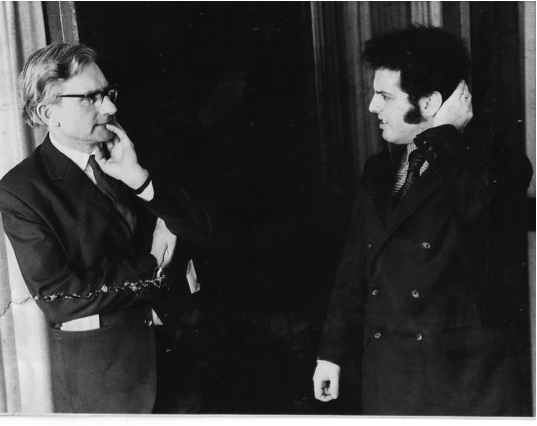 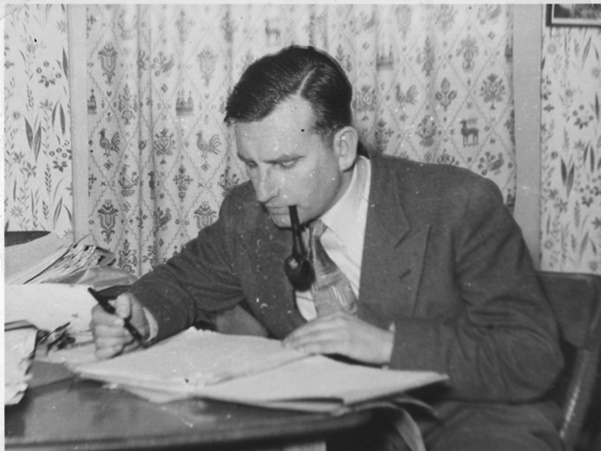 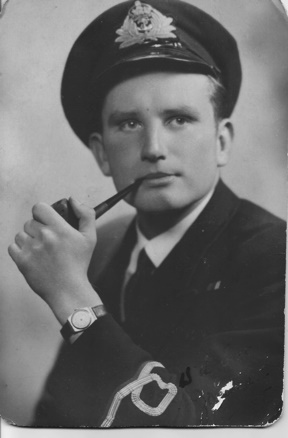 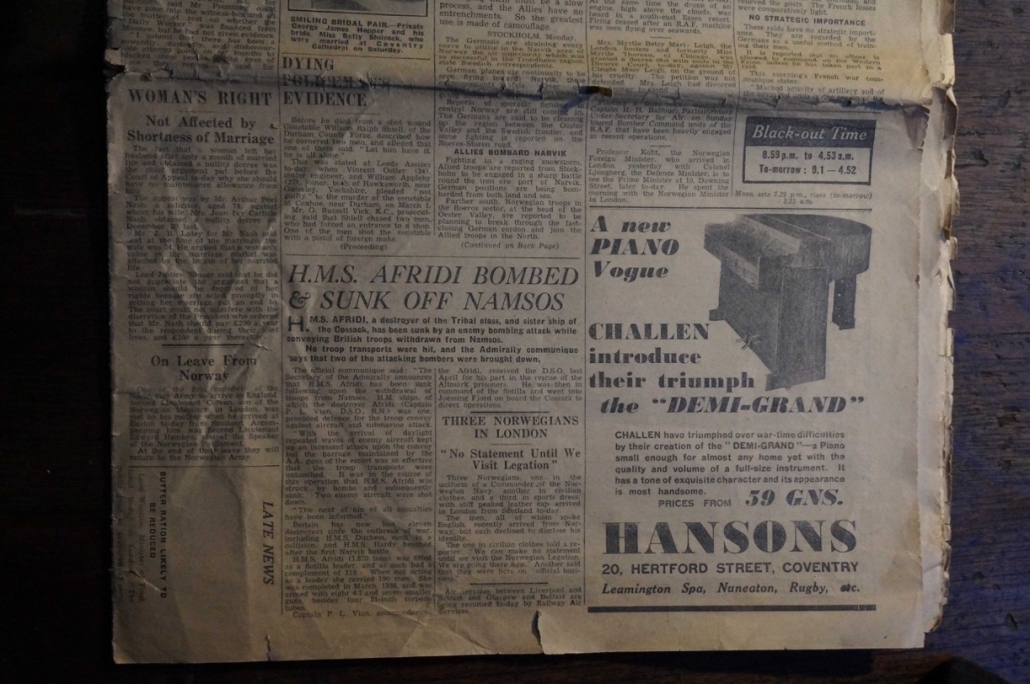 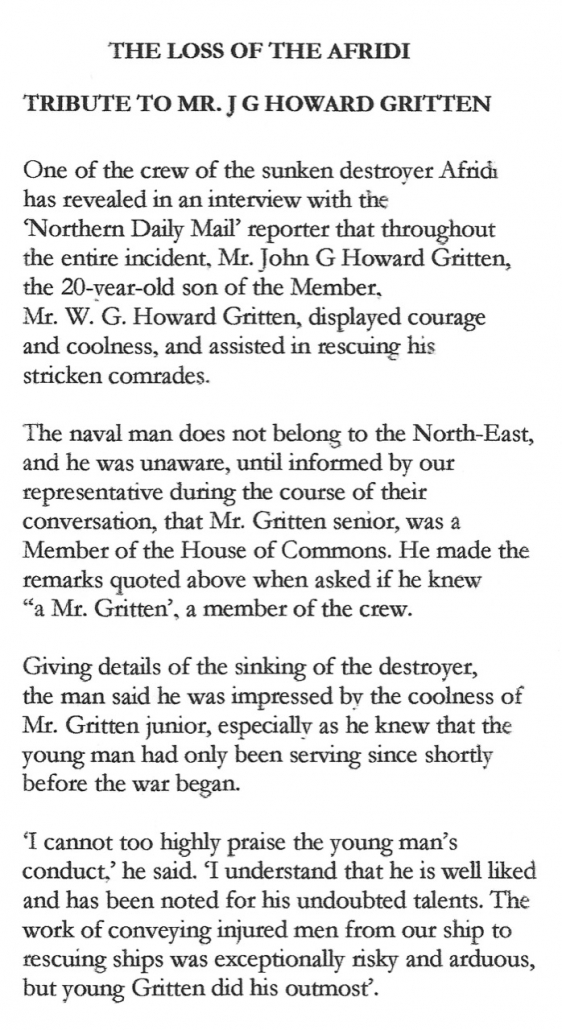