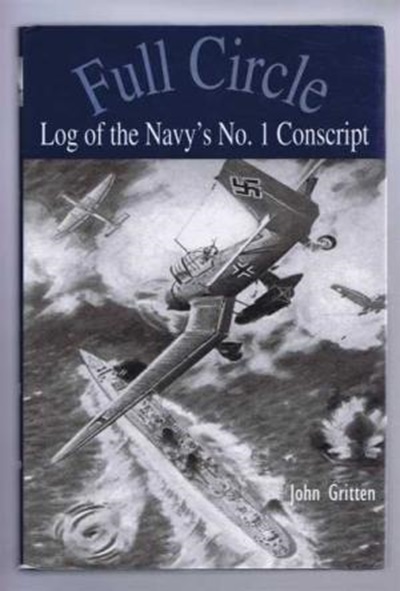 This is the autobiographical account of nearly seven years in the wartime Royal Navy, the last three as Official Naval Reporter (Lieutenant RNVR) following four years on the Lower Deck as a stoker. John Gritten was the only ONR to land on a D-Day beach after his craft was holed. He filed reports on: a gun-toting German woman, allegedly firing on American troops (which prompted questions in Parliament); Hitler’s secret weapons’ attacks on Allied Normandy shipping (blue-pencilled by the Admiralty censors and recounted here for the first time); operations with Royal Marine Commandos in France, Holland and Burma; and with the British East Indies Fleet, including the liberation of Rangoon. By coincidence, Gritten was aboard the Tribal class destroyer HMS Afridi in 1940 when it was bombed and sunk in the evacuation from Namsos, Central Norway — the Second World War’s first Dunkirk — and again aboard the Tribal Class Tartar, near-missed by a Japanese bomber shortly before the end of the war. That completed his ‘full circle’. Other highlights include: an account of near-obliteration by ‘friendly’ rockets; the ordeal of HM Submarine Shakespeare; the sea rescue of prospective ‘comforts’ for the Japanese troops; and mind-searing descriptions by French and British survivors of what happened to their comrades when two destroyers were sent to the bottom by dive-bombers.

Anyone with an interest in wartime naval manoeuvres will appreciate this compelling historical document. Hull Daily Mail

Those who know little about the subject will be educated, moved and entertained. Journal for Maritime Research, National Maritime Museum, Greenwich

The Royal Navy probably could not believe their luck when one of their first recruits after conscription was introduced early in 1939 turned out to be a young journalist. But after enrolling him as Special Reservist No. 1 and telling him his role would be to give the Navy publicity, when he chose to become a stoker after training he disappeared off the Navy’s radar for quite some time.

Although the book has been titled Full Circle it might have been more accurately termed Two Semicircles. Its first two sections covering the evacuation from Norway and a shore based posting in England are written from diary notes made while John Gritten is serving as a stoker. The story is autobiographical and written with a reporter’s eye and attention to detail. It vividly conveys the sense of unknowing urgency which existed in the engine room. We also see the reactions of the stokers and ratings, hear their thoughts and can fully appreciate their muttered questioning the actions taken by the commissioned ranks.

By the second half of the story the Navy has caught up with the author who has now been plucked out of the engine room to serve as a Press Liaison Officer. For better or for worse his perspective of the action changes. The D-Day Normandy landings and service in the South East Asia Command are written from the more detached viewing platform of a commissioned officer but what this section loses in realism is made up for by the more global picture it brings.

The final chapter goes back to the evacuation of troops from Norway, joining the semicircles of the reader and realistically describing the horrors of the aerial attacks on the North Sea evacuation convoys. This book will be welcomed by students of human behaviour under stress, and also provides comprehensive references for any who may be more interested in the historical events. Naval Historical Society of Australia

5.0 out of 5 stars
An absolutely amazing read! The real McCoy!! A brilliant first-hand account of life both onboard and occasionally off the tribal class destroyer, HMS AFRIDI. The book is illustrated with a generous handful of contemporary photographs as well as Gritten’s ability to lead his readers through beautifully woven words down into the real action below-decks in the massive boiler rooms. The narrative is amazingly descriptive, in some parts funny and others sad and shocking as Gritten accurately depicts the real horrors that face those at war.

WARNING! A delightfully detailed account which cannot be read in a hurry, but put the book down and it will you lure you back before too long!

5.0 out of 5 stars
Gritten describes an eventful few years in the RN during WW2, Easy to read, and at times humorous, he describes his awakening from a relatively comfortable middle class English upbringing to an awareness of how other classes, cultures and nationalities view the world. With a journalist’s skill and flair, he describes his physically unscathed emergence from over 6 years of naval service, at first as a stoker, then as an official RN journalist. I recommend it to not just aficionados of WW2 literature, but also people who enjoy reading about the human condition. To those of us who are too young to have lived through WW2, this book is a valuable account of some of the sacrifices that our elders made to resist the spread of the scourge of fascism.

A Musician Before His Time – Constantin Silvestri conductor, composer and pianist 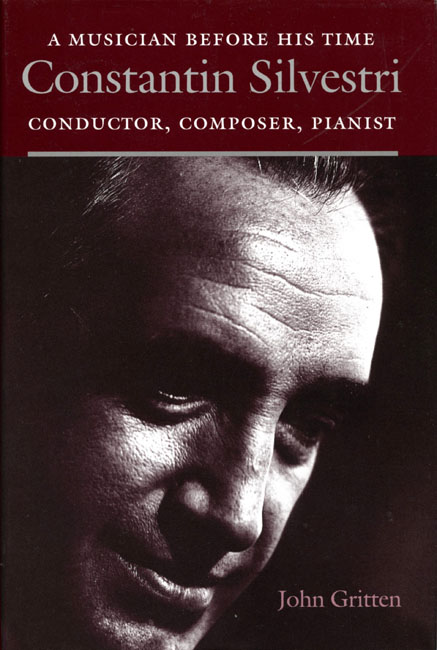 A biography with a Foreword by Yehudi Menuhin, Lord Menuhin of Stoke D’Abernon

For the first time the fascinating life story is told of a musician who has been compared to Von Karajan and Barbirolli. Silvestri’s conducting electrified East European audiences in the Fifties and worldwide in the Sixties. About the two versions of Tchaikovsky’s Manfred Symphony coupled with Liszt’s Tasso and Respighi’s Pines of Rome (on BBC Legends and Testament labels), The Gramophone commented:

After listening to conducting like this, you might ask why the Romanian Silvestri didn’t occupy a more elevated position in the musical hierarchy and public consciousness. This is without question one of the greatest ever recordings … Something of a minor miracle … The Silvestri phenomenon…

John Gritten was impressed by Silvestri’s conducting of Stravinsky’s Symphony of Psalms, in the Royal Festival Hall in 1957, one of the maestro’s two London debut concerts.

From exclusive access to Silvestri’s personal letters and research in Bucharest, the author reveals Silvestri’s pre-war struggles in Romania against ill-health and intrigue, his loves, set-backs, triumphs and frustration at political interference. As a composer of some 40 orchestral, chamber and vocal works he was considered avant-garde.

Silvestri became a British citizen shortly before his soaring reputation was cut short by cancer at 55. In the words of the eminent specialist who tended him: ‘The world has lost a great musician.’

A Musician Before His Time was used for reference in several BBC Radio 3 programmes on Silvestri.

Aside from purely factual discoveries, the strength of Gritten’s book – the first substantial writing about the conductor in English – is its selection of quoted descriptions as to what Silvestri’s music-making actually sounded like (all too rare in many conductor biographies). . .This story is well worth telling and reading. BBC Music Magazine

John Gritten’s painstakingly researched and generously illustrated book must be welcomed, especially as a reminder of Silvestri’s achievements wih the Bournemouth Symphony Orchestra . . . Absolutely indispensable to anyone who admired this brilliantly individual musician. Classical Music

In John Gritten, Silvestri has found a sympathetic, fluent advocate who brings out the colour and warmth of the conductor’s personality as well as providing valuable insights into Silvestri’s qualities as a musician…Gritten’s book is at its best in discussing the personal and musical details of Silvestri’s years in Bournemouth…Connoisseurs of conductors will find much of interest in this absorbing book. Journal of the Conductors Guild, US

John Gritten has revealed a complex and dynamic person … The book is written in a readable, journalistic style, clearly aimed at the general music-lover rather than the specialist – yet even the latter will find valuable information here. International Record Review

5.0 out of 5 stars
A splendid portrait. https://www.amazon.co.uk/Constantin-Silvestri-Musician-Before-Time/dp/1900496127

Howard and Son – rebels of a kind 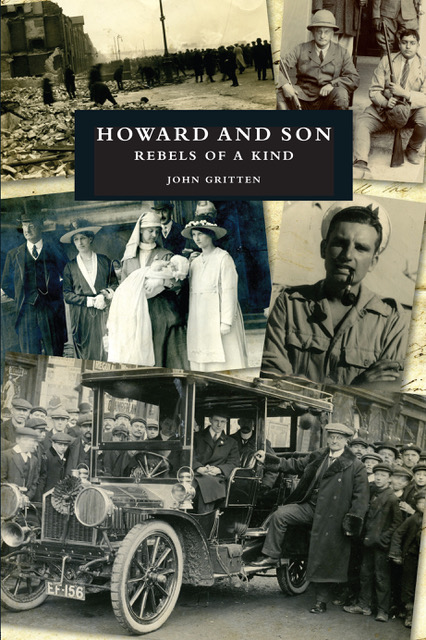 In the author’s own words:

If ‘history is the essence of innumerable biographies’, there is surely a niche for that of an English Parliamentarian who initiated the unseating of an MP by a Petition to the House of Commons and himself served under five Prime Ministers. The life story of Howard Gritten covers the 70 years from the Franco-Prussian War to the middle of the Second World War’.

The remarkable aspect of John Gritten’s biography of his father is the quality of the author’s writing style and research in embracing the political, social, indeed global picture of events that spread across an entire century from the mid-1800s to the Second World War. Geoffrey Goodman CBE, biographer; author of From Bevan to Blair.

3.0 out of 5 stars
The highly professional cover, binding and printing of John Gritten’s memoir of his father’s life and political career make a good first impression. The photographs of family and public events covering over a century add greatly to the pleasure of this at times acerbic account of the father, who was a long-serving Member for Hartlepool.

Correspondence between Howard and such as Lloyd George, Ramsay MacDonald and Lord Londonderry do much to illuminate the political ethos between the wars. The father-son relationship, never cordial, becomes quite bitter on Gritten’s part after Howard’s death, when he discovers his father’s secret life and family betrayals. Moreover, Howard’s Tory politics are anathema to Gritten, who becomes an ardent leftist and is questioned by police for distributing the Daily Worker.

For the general reader there is rather too much family background, some going back to the 1830s, but the narrative soon begins to grip and this wicked exposure of a cunning old-style Conservative becomes both fascinating and amusing.

The style throughout is dignified and formal, full of rhetorical questions, sometimes posed about other father-son deceptions, such as the McEwans. This gradual disclosure of the sins of the father is both history and mystery.

The above books are available new by email order from this website and second hand from Amazon, AbeBooks UK and other online outlets. 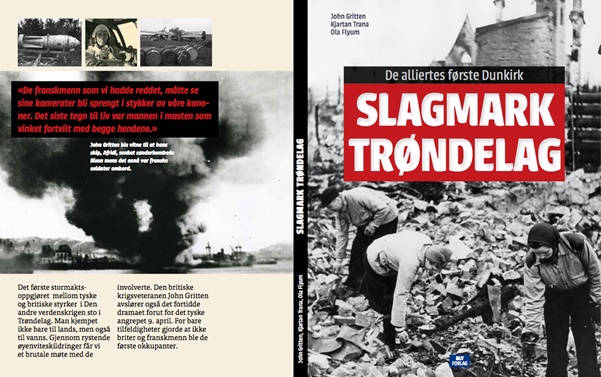