Creating cultural and personal bridges between young musicians of different nationalities became one of my wishes when Eastern Europe opened its ‘iron’ gates. Various opportunities emerged to invite Romanian, Russian and Bulgarian musicians to join The London Schubert Players chamber orchestra on British and international concert tours. The result proved rewarding and enriching. Both sides learned from each other’s musical and technical approaches. The orchestra’s sound was enhanced by traditional Eastern European string playing. The British players instilled their exceptional orchestral training skills into the group.

It also meant I could establish interactive projects between British and Romanian schools. In 1999, I initiated the yearly Silvestri Scholarships for 16-year-old Romanian students to study at independent schools in England and Scotland. In 2002 and 2004, I produced educational concert tours for the string orchestra of Bucharest’s eminent George Enescu Music School – a state school and the top specialist music school in Romania.

As the school’s alumna, I was delighted to introduce the group of 16 strings to well-known British schools: the Yehudi Menuhin in Cobham, Chetham’s in Manchester, St Paul’s in London, Christ’s Hospital in Horsham, Pocklington in York, and Mary Erskine and Stewart’s Melville College in Edinburgh. In addition, the orchestra performed in the Chiddingly Festival in Sussex and in Holmbury St Mary in Surrey.

The concerts in which the Enescu school orchestra joined forces with the Menuhin, Chetham’s and Christ’s Hospital schools respectively were the most memorable. They performed together works by the Romanian composers George Enescu and Constantin Silvestri and their English counterparts, Vaughan Williams and Benjamin Britten.

A visit to the Durand Primary School in Stockwell, London, created another unique experience: it was the first time these Romanian students experienced a multicultural environment and they were grateful for it. Introducing the concert programme, I first asked the children in the audience: ‘Do you know where Romania is?’ Answers came rolling in: South America! The United States! Scandinavia! Finally, one child got closer: ‘near Germany’.

During the tours, I took the Enescu school orchestra on educational trips to London museums and arts centres, as well as to hear on one occasion, the London Symphony Orchestra in the Barbican Centre. It was a concert-lesson conducted by Pierre Boulez, with commentaries and explanations: ‘The event of our lives,’ the Romanian students said afterwards.

There were also exchanges on Romanian soil. In a project supported by the Silvestri International Foundation in 2004, I chaperoned the Morgan Brass Quintet from Chetham’s School with violinist Melanie Di Cristino from the Yehudi Menuhin School on a tour which included joint workshops and concerts with young Romanian musicians from Transylvania and Bucharest.

The concerts took place in the Palace of Culture in Targu Mures; in UNESCO World Heritage Sites in Transylvania (such as the fortified churches of Sighisoara and Biertan, built by Saxon settlers in the 12th century); and in the Ioan Nemtoi Art Gallery in Bucharest where I initiated the first Silvestri Mini-Proms concert series. 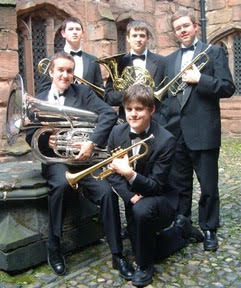 Thank you for all you have done to make the Chets visit (to Romania) possible! Let’s hope it will be the start of a productive and beneficial process that will support all our young musicians!